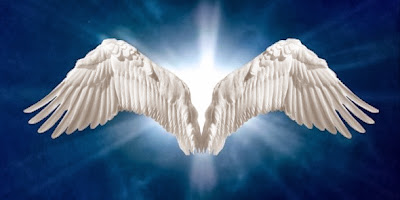 Angels aid and help with healing, deliverance, miracles, blessings, harvest, and even judgment against your enemies. Angels assist with breakthrough as well, and since this blog is about fasting for breakthrough, prayerfully some of the stories you hear will serve as encouragement to understand when you do tap into levels of prayer and fasting angels are released on your behalf and breakthroughs are released and experienced! For those of you who are trusting God for answers to prayers trust and believe that God has released angels on your behalf to help with your prayers! I wanted to share this story with you regarding my baby girl Jordan.

My daughter Jordan saw four angels standing beside me!

This happened once while I was in prayer. During the time, the only people who were home were my youngest daughter Jordan (who was at the time 4 years old). I was in the middle of the walkway kneeling before the Lord in prayer, and though I did not see any Angels, I felt the presence of them. During a point in the prayer, Jordan came over and knelt down with me. After I got up and finished praying, I asked Jordan did she see any Angels, and she smiled and said, “Yes Mommy,” there were four Angels standing around you while you were praying! Glory be to God!

She has always been an anointed child of God, and she started making references to angels early on. This is our youngest daughter, and we realized what she was saying was true I really believe by the spirit of the Lord that she has not only seen angels, but God has allowed her on a couple of occasions to see heaven because there have been times when she has told me that she has seen Jesus. One time, it was around the same time we had lost her granddaddy, my husband’s father my father-in-law, that she said that she saw Jesus. I asked her what he had on and she said white. When she said it, I felt the sweetest presence. One time she said, “The angels took me to a place and it was very clean there.” She even mentioned seeing some very beautiful flowers. I share this with you because sometimes when we have anointed children we need to listen to what they are saying. She also would say that the angels would protect her, and when she saw a monster, she saw three angels there. She said how the angels would smile. She would refer to the angels being in different place in our home ex in front of the doors or windows.

I share this again because angels are sent on assignment. They are messengers of God. We are not to pray to them, but definitely, we pray to God and ask God to release the holy angels to help, to aid and also to protect and assist us. Just as an angel came to strengthen our Lord and Savior Jesus Christ right before he was to go to the cross, he will send them on your behalf when you call upon him with a pure heart.

And there appeared an angel unto him from heaven, strengthening him.Luke 22:43

Below, I've listed some scriptures on Angels. Remember we are not to worship Angels but as we cry out to God for Holy and Divine help, he will release them to carry out spiritual warfare that is needed on our behalf.

Psalms 91:11 - For he shall give his angels charge over thee, to keep thee in all thy ways.

Jude 1:6 - And the angels which kept not their first estate, but left their own habitation, he hath reserved in everlasting chains under darkness unto the judgment of the great day.

Matthew 25:31 - When the Son of man shall come in his glory, and all the holy angels with him, then shall he sit upon the throne of his glory:

Matthew 24:31 - And he shall send his angels with a great sound of a trumpet, and they shall gather together his elect from the four winds, from one end of heaven to the other.

Acts 5:19 - But the angel of the Lord by night opened the prison doors, and brought them forth, and said,

Psalms 34:7 - The angel of the LORD encampeth round about them that fear him, and delivereth them.

Jude 1:9 - Yet Michael the archangel, when contending with the devil he disputed about the body of Moses, durst not bring against him a railing accusation, but said, The Lord rebuke thee.

Matthew 4:11 - Then the devil leaveth him, and, behold, angels came and ministered unto him.

Please check out some of the other blog posts and if you want more information regarding this same topic order a copy of Fasting for Breakthrough book!

It is packed with great information that will help answer many questions believers have regarding tapping into "Breakthrough God's Way" and drawing closer to the Lord through fasting.

Lenika Scott
Author of
Fasting for Breakthrough
Posted by Lenika Scott at 9:52 AM